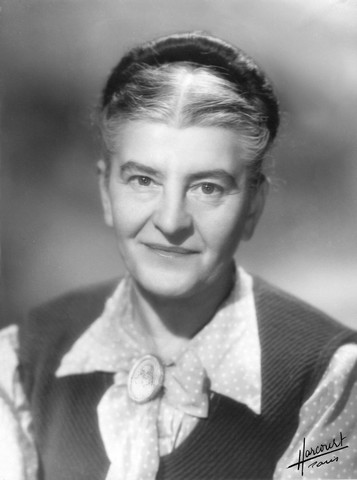 On January 17, 1892, Eugénie Bellemin (Svezda) was born into a protestant family of Lyon, whose four children early on developed a great interest in the spiritual sciences and in what today we call parapsychology. Svezda was drawn not only to the research of spiritual truths -- which would lead her to discover the Master Peter Deunov (whom she met in 1937) and the teaching of the Universal White Brotherhood, and later to the service of the Master Omraam Mikhaël Aïvanhov -- but also to scientific research. She pursued university studies and in 1918, with a diploma in the sciences, became a member of the Société Astronomique de France at a time when women were not readily accepted in scientific circles. Tenured in the Office National Météorologique, she held a post first at the airport of Lyon-Bron, then at the Observatoire de Trappes near Paris. She made meteorological discoveries which were published in scientific reviews. During World War 1, she volunteered as Director of the Service des Recherches des Réfugiés belges et français at the Lyon town hall, for which she was decorated in 1920 with the Medal of Queen Elisabeth by the King of Belgium. Subsequently appointed to the Bibliothèque Nationale, she relocated to Boulogne-sur-Seine where a series of unforeseen events in 1937 would give her life an entirely new direction. 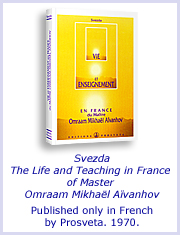 For more than forty years, Svezda fully dedicated her life to the Master Omraam Mikhaël Aïvanhov in her official function as his secretary. Prepared from birth for her meeting with him, she had been given all necessary criteria to assess his greatness and to recognize the value of his teaching. She was a privileged witness to the work he accomplished daily. In her book, The Life and Teaching in France of the Master Omraam Mikhaël Aïvanhov, written in 1970, Svezda offers this testimony: ‘On many occasions during this period I was surprised at Frère Mikhaël’s comportment. One sensed that he lived according to absolutely unusual norms… and I felt compelled to understand the deep reasoning that dictated his actions. This is why I paid attention to his slightest gestures, attempting to penetrate his motives…. In both his movements and his words, one felt a gentle yet tenacious will that manifested the unmistakable presence of the spirit and a celestial harmony.’

‘Everything was connected and consistent in the life Frère Mikhaël lived. I never found the slightest discrepancy between his life in the community, his words and his comportment at home. Living close to him for so many years allowed me to confirm this. He never advised others to do anything he had not put into practice in his own life. He was a vegetarian. He never accepted the slightest personal service, even those that are so easily and normally offered in a community setting. He alone took care of his bedroom, cleaned it and made his bed. He took charge of his own laundry as well, and did so with the greatest care.’

‘What most struck one upon first meeting him was the intense light that radiated from him, a light imbued with gentleness and a pure, selfless love that seemed to pour over everything and everyone in a kind of divine flux. In the way he looked at people one sensed a consummate generosity that belongs only to the saints and great Masters. Observing Frère Mikhaël, one had the impression that his sole task was to offer this divine gift of love unreservedly to all, whether young or old, beautiful or ugly, rich or poor. On the material plane, he manifested a will that never acted to the detriment of others, a pure soul full of sacred and selfless love, and an exceptionally clear and penetrating intellect, endowed with extraordinary powers of analysis and synthesis. Moreover, he thought divine thoughts, felt them and acted on them.’ 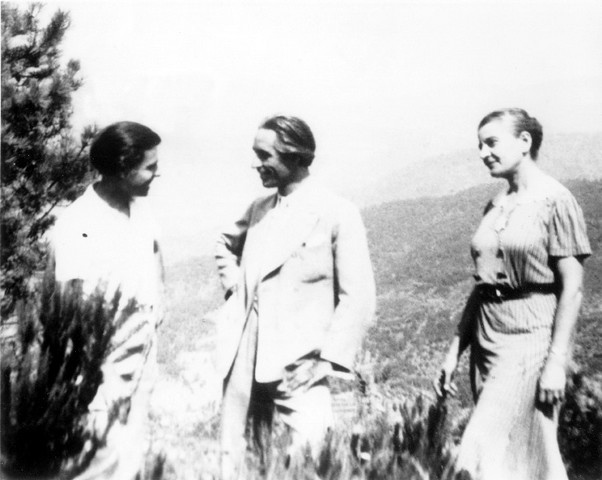 ‘In the face of the immense spiritual stature of the Masters, I have always felt as if imprisoned in the powerlessness of the animal nature. Isn’t this what animals must feel in relation to the humans who have adopted them? Although we may do our very best on our level, we remain less than what we should be, often causing our beloved Masters to suffer in unimaginable ways. Living in the presence of Frère Mikhaël, I realized what great preparation is required of those who intend to serve the Masters.‘

‘The more I observed Frère Mikhaël, the more I listened to him and watched him live, the more I marveled at the quality of his knowledge, his extreme patience, his astonishing pedagogy and especially this love that motivated him to care for us, to find ways of explaining these truths so simply and clearly, truths which so many religious or philosophical books have obscured with confusing explanations in language incomprehensible to the masses. To listen to him was to see at once one’s own weaknesses and to perceive a practical path of self-transformation. It was, in spite of oneself, to realize that human beings are called to evolve in the way the Creator intended, and that their only possibilities are to rise toward the infinite or to descend and disappear in the most extreme limitations. Without artifice, without concern for appearances, Frère Mikhaël broached all subjects with simplicity, allowing himself to speak his thoughts, to manifest life in all its forms: those of the mind, sentiment and will, effortlessly passing from one to another. He was without preconceptions as to how a speaker should express oneself and was free of all desire to impress his listeners.’

‘I could mention many of Master Mikhaël’s qualities: generosity, delicacy, audacity, clairvoyance, constancy, and so on. But I have refrained out of concern for the length of this testimony, and because some of these qualities obviously go hand in hand with the virtues I have mentioned. His steadfastness, for example, presumes a combination of patience, goodness, detachment, intelligence, etc. Without exhausting the reader, it would be impossible to examine in detail a character as rich and varied as that of Master Mikhaël. Upon reflection, readers themselves will discover all that is comprised in the sum of those qualities. Throughout a lifetime of both unspeakable ordeals as well as easier times, he was able to manifest love, forgiveness, unbounded patience, obedience, steadfastness in his ideal and his faith, detachment, selflessness, a spirit of freedom, humility, purity, gentleness and firmness, simplicity, sincerity, wisdom, nobility, self-mastery and self-sacrifice. 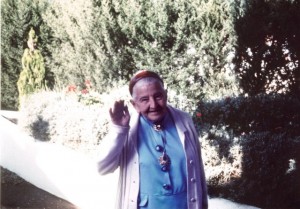 One who was able to radiate these virtues, recognized even by little children, and who knew how to attract the attention of the invisible was a living example of what human beings can and must become. This is a Master Teacher of life.

Such a Master shows us how to live. He serves as a model of how to conduct oneself in all circumstances, demonstrating that after a lifelong journey of demanding work, he has become a virtuoso in the art of living. He differs in all ways from those who fail to put into practice what they preach, or who are content to trade in spiritual truths. On the contrary, if a teacher possesses, as did Master Mikhaël, an intelligence capable of both a subtle and penetrating analysis and a vast capacity for synthesis, he becomes a pedagogue and a Master in the western sense of the term. He is able to teach others how to live, to rise above all earthly contingencies, and to remain unwavering in one’s convictions, one’s faith and one’s Ideal.’