History of the Universal White Brotherhood in Canada

The Canadian brotherhood originated more than thirty-five years ago when a small group of people decided to explore in depth the spiritual teaching of Omraam Mikhaël Aïvanhov.

As a result, various gatherings took place in the mid-1970’s in the Sherbrooke and Montreal regions for the purpose of studying the Master’s books and talks. With study, reflection and meditation, the participants in these meetings were inspired by the discovery of a profound and universal ideal and the dawning of a collective and fraternal consciousness. This extraordinary adventure coupled with an understanding of the great principles and universal laws to be applied in daily life sparked great enthusiasm in them. From then on, their ultimate wish was to meet this Master whose books testified to his knowledge of a profound initiatic philosophy, and whose inspiration seemed to flow directly from the divine world. A group of them travelled to the Bonfin, the sacred domain in the south of France and the center of the Master’s teaching for more than 50 years.

Their stay of several weeks in the heart of collective life, intensified by the loving presence of the Master, was profound and exhilarating. The encounter was decisive and further inspired them to apply concretely to their lives in Canada the principles and methods recommended in the many talks they had attended. Now well engaged, they had the opportunity once again several months later (in late 1976 and early 1977) to benefit from the presence of their Master, this time in a suburb of Paris at the Izgrev center, headquarters of the Universal White Brotherhood. Still today, the memories of this spiritual pilgrimage remain fresh and alive. The Master offered certain directives, and at the end of this second visit, on January 13, 1977, he appointed the head of the Canadian brotherhood who continues to preside in this capacity today.

Throughout the following years, the Canadian projects intensified and a collective life developed. In 1978, the goodwill of all and a desire to pool their efforts led to the purchase of a property in Laval, near Montreal. The first meetings there took place in the early days of the New Year, 1979. In the spring of 1981, a ten-unit apartment block was constructed on the grounds, substantially increasing the accommodations for résidents. 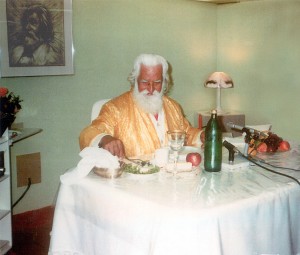 At the same time, and beyond all expectations, an extraordinary event was in the works: the Master had announced his impending visit to Canada. During thirteen days of sheer joy, from June 3 to 16, the residents of the Laval center had the great privilege of hosting their spiritual guide. Sensitive to their excitement, the Master generously delivered a talk after each sunrise in a small room organized for this purpose. One sensed that his words were inspired by the highest realms, imbuing the listeners with life from other worlds, uplifting their souls and suspending them in an atmosphere that was almost unreal. What wonderful moments….

In June 1984, the Master gave the center the name ‘Radost’, a Bulgarian word meaning ‘joy’. And aptly so, since it was with profound joy that this center grew and prospered: construction and agricultural projects intensified to promote a life that was harmonious, stimulating and fraternal. From then on, the frequency of trips to France to meet with the Master increased, the travelers returning full of wonder and enriched with counless treasures. On September 28, 1981, during yet another visit by the Canadians to France, the Master officially named Roméo Paquin as president of the Universal White Brotherhood of Canada and of Prosveta, Inc., publisher and distributor of the Master’s books.