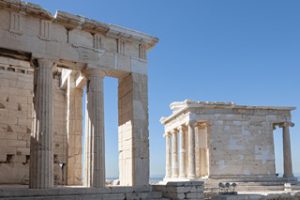 ‘«Know thyself» was the maxim inscribed on the pediment of the temple at Delphi. What is this ‘self’ that we have to know? Is it a question of knowing our own vices and virtues, our strengths and weaknesses? No: to know oneself is to know the different bodies (the physical, etheric, mental, causal, buddhic and atmic bodies) of which we are formed and what each of these bodies needs. If the initiates of old insisted so much on the necessity of self-knowledge, it was because this knowledge opens up tremendous possibilities for growth, progress and success. As long as man is ignorant of the needs of his higher self, he will continue to surfeit his physical body while his soul and spirit suffocate and die of hunger and thirst.’

‘«Know thyself»! All science and all wisdom lies in knowing oneself, in finding oneself, in the fusion of one's lower self with one's higher Self. The symbol of the initiate who has succeeded in finding himself is the serpent with its tail in its mouth. A serpent forms a straight or wavy line, and a line is limited. But the serpent with its tail in its mouth forms a cirde, and a cirde represents the infinite, the limitless, the eternal. He who succeeds in becoming a circle enters a world without limitations where the «above» and the «below»are no longer separated, because all the powers and all the riches and virtues of the true, higher Self have been infused into the lower self. The higher and the lower become one, and man becomes a divinity.’

‘To know oneself is to possess the science of the different bodies that constitute the human being (physical, etheric, astral, mental, causal, bouddhic and atmic) and the conditions necessary if they are to flourish. If the initiates of antiquity so insisted on the necessity of knowing oneself, it is because knowledge of oneself opens the greatest possibilities for advancement, for progress, for success.’ 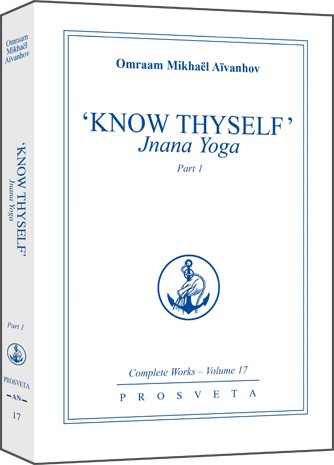 The chart you have in front of you is a resumé of all initiatic knowledge, of all the sacred books of humanity. Obviously we can give other diagrams for the psychic life of man and I have given you others. Look. For example, when you want to give an idea of the anatomical structure – to facilitate comprehension, you don’t present everything at once. You are obliged to make different diagrams for the different systems: bony, muscular, circulatory, nervous… In geography, too, there are physical, political, economic, geological maps. So there can be different charts to explain the psychic structure of the human being, and even though this one is different from the Sephirotic Tree, for example, it represents the same reality and you can recognize everything in it. I have given you other diagrams and although they are all different, they don’t contradict one another.

You won’t find this chart which I am presenting to you today in any book. This is the first time it’s been given; it’s a resumé, a synthesis of all the truths of life. For the moment, you see only isolated words, with no connection between them, but once explained, connected, and put in context in this whole, all their significance and correspondences will amaze you.

You see that this chart (which we call ‘’synoptic’’ because it presents a comprehensive view of the structure of the human being and the activities which correspond to that structure) is composed of five vertical columns.

The first column indicates the ‘Principles’ of which man is constituted: the physical body, the will, the heart, the mind, the soul and the spirit.

In the second column you see written, ‘’Ideal,’’ because each principle aims towards an ideal. The heart, the mind, the soul have an ideal which is obviously different for each one.

In order for each principle to attain its ideal it needs to be nourished, fed, strengthened, and we must give it the means of surviving so that it may go on manifesting itself. That is why the third column is marked ‘’Food.’’

Finally, the last two columns are devoted to ‘’Payment’’ – that is to say, the price you must pay for the food – and to ‘’Activity,’’ that is, the work that has to be done to obtain this payment.

So you see that all these notions are connected to one another in a perfectly clear and logical way. 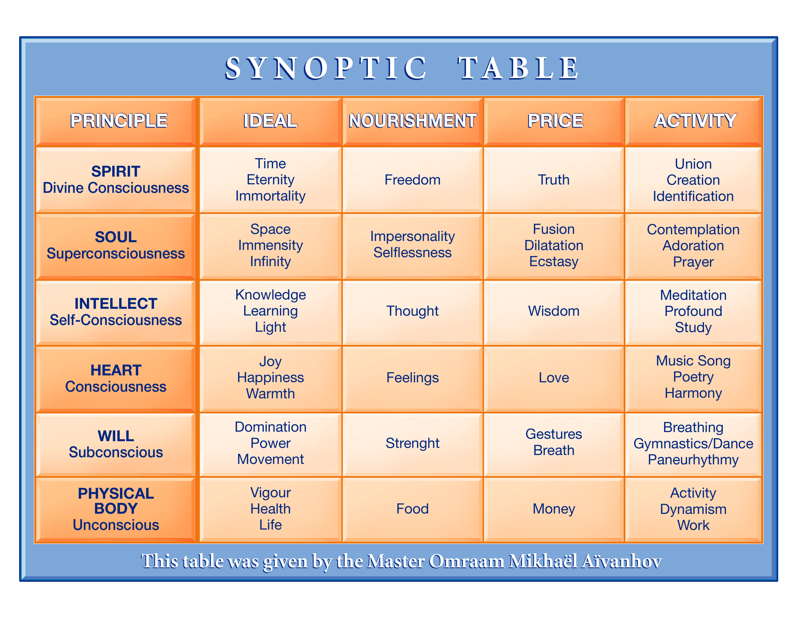